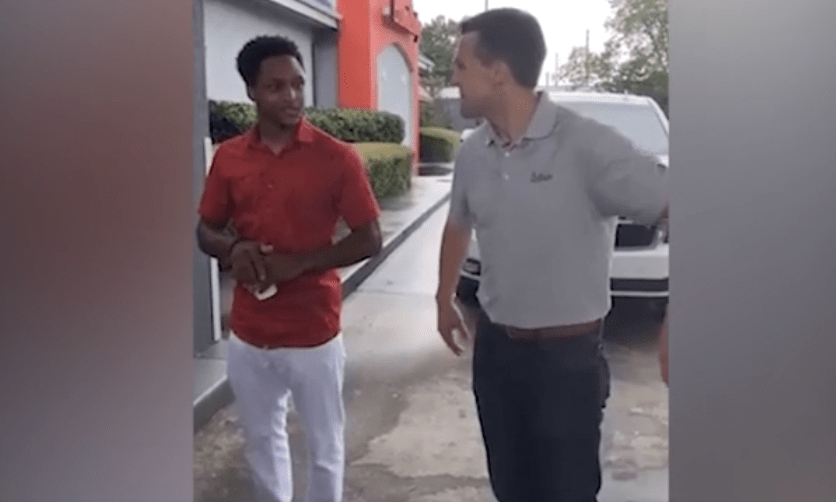 An Alabama man walked almost 20 miles to his new job. When his boss found out, he gave him a car.

Home » Company news » An Alabama man walked almost 20 miles to his new job. When his boss found out, he gave him a car.

An Alabama man walked almost 20 miles to his new job. When his boss found out, he gave him a car.

Walter Carr sent his friends a flurry of increasingly pleading text messages. The college student’s car had broken down, and he was supposed to begin his new job as a mover the next morning — at a home 20 miles from his apartment near Birmingham, Ala.

He struck out finding a ride, but he wasn’t about to miss his first day of work at a moving company called Bellhop. Carr, 20, needed the work. He mulled his predicament and concluded there was only one option: He would walk it.

“I sat there and I thought, ‘How can I get to my job? What streets would I walk through? How long would take me to get there?’ ” he said in an interview with The Washington Post.

He searched the route from his apartment in Homewood to the house in Pelham, and according to Google Maps, it would take eight hours on foot. As a former high school cross-country runner, he knew he could do it in less.

Carr ate a meal of bologna and eggs at 8 p.m. and took a nap. At midnight, he woke up, grabbed his wallet, phone, a baseball and a kitchen knife to protect him from stray dogs. He headed out into the dark.

“I’ve always been that person who figured things out on my own,” Carr said. “I went out walking.”

A few hours in, he did come across a dog. He threw the ball. The dog ran after it. Carr went the other way.

On the trek, Carr had the route mapped out in his mind. He jogged some. He walked a lot. When his legs began to burn, he stayed focused on his goal.

“I was just thinking about my route, how I was going to get there in the time frame I needed to,” Carr said.

He’d had jobs in the past as a cook at fast-food restaurants, but this paid better, and he needed the money for an apartment he’d recently rented.

At 2 a.m. he passed the city of Hoover. Around 4 a.m. he reached Pelham, but he still had hours more to walk to get to the house. He was about to enter the highway ramp, the most direct route to the job. He sat down in a bank parking lot.

“I decided I’d rest for a minute because my legs were killing me,” he said.

A police car pulled up and the officer, identified by the news site AL.comas Mark Knighten, asked if Carr was all right. Carr said yes, and explained what he was doing.

“I said, ‘This is crazy but I’m actually heading to work. It’s my first day in the job,’ ” Carr recalled.

The officer asked him when he last ate, and Carr told him about the bologna and eggs. Knighten offered to take him to get something more in his stomach.

Knighten told him to get in the car, the meal was on him. They went to Whataburger with some other officers, and Carr ordered a chicken biscuit. At the urging of the officers, he ordered another one, he said.

Knighten drove Carr a few miles toward his job and dropped him at a church, saying it was a safe place to be. Knighten had to leave because of a shift change, but he said another officer would be by in a few hours to check on Carr, and perhaps give him a ride to work.

But after Carr got to the church, he became concerned he might not make it on time. So around 5:30, he started walking again.

Carr was walking on a two-lane road, and sure enough, a police officer came up and said he’d heard about him. That officer, identified by AL.com as Scott Duffey, drove Carr the last four miles to his job.

At 6:30 a.m., Duffey walked up to the house where Carr was supposed to meet the other movers for the job, and explained to homeowner Jenny Lamey what had happened.

“The officer told me, ‘I’ve got this nice kid in my car. He’s a great kid, he’s been walking all night to get to your house,’ ” Lamey said. “That’s when the tears started coming. I just started crying.”

Carr came to the door and Lamey offered him a bed to take a nap, and some food.

The other two movers from Bellhop showed up shortly after, and the three of them moved the Lameys across town to their new house. Everyone got along as if they were old friends, Carr and Lamey said.

Lamey said she has no idea how he had the energy for it.

“I can’t imagine what kept him going,” Lamey said. “What came over him physically was supernatural. I think God helped him through.”

Lamey said this is just the beginning of what she hopes is a long friendship between Carr and her family.

“He’s such a humble, kindhearted person,” she said. “He’s really incredible. He said it was the way he was raised. Nothing is impossible unless you say it’s impossible.”

One of Carr’s new co-workers gave him a ride home.

The following day, Lamey called Carr’s supervisor, and the two cried together on the phone about what Carr had done. Lamey posted the story on Facebook, and it took off. She started a GoFundMe with a goal of $2,000 to help him with his car troubles. As of Wednesday morning, it had raised more than $44,000, and a financial adviser had volunteered to help Carr manage the funds.

On Sunday, Carr’s boss, Bellhop chief executive Luke Marklin, called to thank him. Marklin said he wanted to meet him in person to show his appreciation. They agreed to meet Monday at a coffee shop near Carr’s apartment. Carr walked the 20 minutes there.

When they met, Marklin gave him his own car, a 2014 Ford Escape. He said it would be in better hands with Carr than with him.