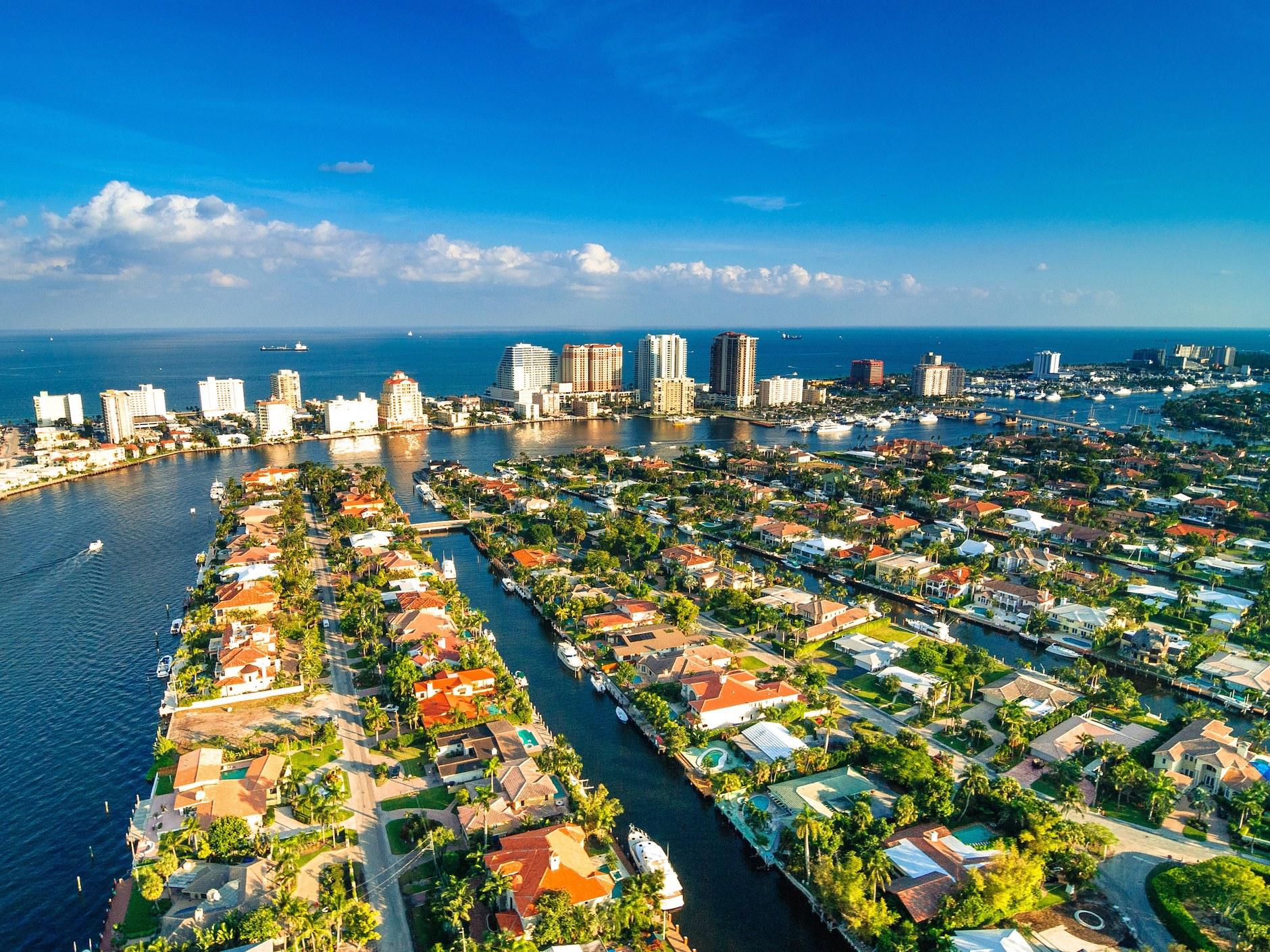 The Best Neighborhoods in Fort Lauderdale (2021)

The Best Neighborhoods in Fort Lauderdale

Moving to a new city is always challenging. And a large part of that challenge is looking for a place to live and it can be quite overwhelming.

That’s why we’ve done the research for you, so you don’t have to.

You’ve most likely seen the neighborhood section in our Fort Lauderdale City Guide.

This list is more in-depth guide examining what it’s like living in each of these areas. We include links to popular destinations along with available houses for sale and apartments for rent (oh, and by way of introduction, we’re Bellhop—Fort Lauderdale movers and throughout the country).

A Little About Fort Lauderdale’s Neighborhoods

Fort Lauderdale has a program for recognizing official neighborhoods, unlike many cities. It’s called the Neighborhood Organization Recognition Program. In it, more than 60 neighborhoods have received official recognition from the city. Why does this matter to you? It helps the city offer more robust info on the neighborhoods within the area.

So, what are you looking for in a neighborhood? If you’re moving to Fort Lauderdale and you want to know the best of what the city has to offer, this guide is for you.

Here are some of Fort Lauderdale’s most popular neighborhoods.

Colee Hammock, you say. What kind of a name is that? We’re glad you asked. Developers built the neighborhood on a rise in the ground around marshes and waterways that once were prominent in the city, known as a hammock.

One of the oldest neighborhoods in Fort Lauderdale, Colee Hammock is a mile and a half from the ocean, next to the Intercoastal Highway and the New River. It’s an eclectic neighborhood with a mix of wealthy and working-class families who sometimes disagree with what’s best for the community. But wouldn’t it be boring if everyone in your neighborhood agreed on anything anyway?

Encompassing Las Olas Boulevard, Colee Hammock is minutes away from boutiques, cafe dining and entertainment venues such as Falafel Time, Luigi’s Coal Oven Pizza, Gran Forno Bakery, Kavasutra Kava Bar and Vinos on Las Olas. From the neighborhood, you can walk to the theater, museums, art galleries, the post office, and pharmacy. It’s a great location for those who like to be close enough to walk places.

Large, new homes built on small lots share this community with condos, apartments, and historic homes. The average list price for homes in Colee Hammock is $350,000.

Located north of Davie Boulevard and west of Andrews Avenue near downtown, this one-square-mile neighborhood has mostly single-family homes and plenty of parks for the kids to get their wiggles out.

With a working-class vibe and convenient location to supermarkets, shopping centers, and the water, Tarpon River is a great place for families and young professionals alike. We could go on about it but we thought we’d share this Miami Herald article about the appeal of Tarpon River.

If you’re a beer lover, then you’ll want to frequent the Tarpon River Brewing Company. Restaurants nearby include Pirate Republic Seafood, the Hardy Park Bistro and The River House. For beach action, visit Sunset Beach. There’s also a cool video game museum called Replay Amusement Museum that has the world’s largest pinball machine. And you can play the games there, no quarters needed.

Residents in the Tarpon River neighborhood are zoned for Croissant Park Elementary, New River Middle and Stranahan High School, all part of the Broward County school system. A nearby private school is Trinity Lutheran School.

Most of the houses in the Tarpon River neighborhood are single-family homes from the 1950s ranging from two bedrooms to three bedrooms. Most are single-story but there are plenty of two-level homes, with a few duplexes, bungalows and apartments. The average home value is around $320,000, while condos and townhomes are around $232,000. See what’s for sale and rent.

Victoria Park is one of the most easily-recognizable historic neighborhoods in the eastern part of the city. Established in the early 1900s, Victoria Park evokes the charm of old Florida yet maintains a modern and forward-thinking vibe. With a community of around 10,000 residents, this neighborhood boasts an active civic association and takes pride in its diversity with a mixture of families, gay and straight singles and couples, empty-nesters, and seniors.

Bordered by Broward and Sunrise Boulevards, the Isles of Olas, the Intercoastal Waterway, the Middle River, and Federal Highway, Victoria Park is around a mile away from Fort Lauderdale Beach and a short walk from downtown.

Some of the best shopping and dining is nearby such as Sublime Restaurant and Bar, Canyon Restaurant, the Galleria Mall and all of the activities at Las Olas Boulevard. The neighborhood also has nearby access to five parks, is close to the Broward Center for the Performing Arts, the Parker Playhouse and War Memorial Auditorium.

There are five schools in the area. Fort Lauderdale High School, Harbordale Elementary, Virginia Shuman Young Montessori and Sunrise Middle School are part of the Broward County school district. St. Anthony Catholic School is a private school in the area.

A mixture of restored older homes and newer townhomes and condos, the average home value in Victoria Park is around $355,000.

We’ll be straight up with you. Harbor Beach is one of the most exclusive neighborhoods in Fort Lauderdale. There’s a reason why it’s hidden behind the southern end of Seabreeze Boulevard.

Because this guarded gate community is a boater’s paradise, right in the middle of Lake Sylvia, which seems to always be full of swimmers and boaters. The neighborhood has its own private beach club, complete with a marina. There a lot of retirees who live in this area, but it’s not to say families with kids and even young professionals don’t live there, too.

Harbor Beach lies along the main artery of Fort Lauderdale Beach so traffic can get a bit crazy around the tourist season. Pier 66 is a short walk away with waterfront dining and one of the best spots in the city to view the sunset. There’s also the famous The Wreck Bar, where you can eat, drink, dance, all while watching the live mermaid show.

Since the beach is so close, there are a lot of boating tour companies and opportunities for parasailing and deep-sea fishing. And the Sun Trolley is close by so you can hop on it to go further into downtown, or to the airport, or many other places in the city.

There are a number of public and private elementary, middle and high schools serving Harbor Beach including ATC Technical College and High School, Harbordale Elementary and Cardinal Gibbons High School.

Most of the residents who live in Harbor Beach own their own homes, with the average value of around $554,000. But, there are renters who pay an average of almost $2,000 a month.

The larger area of Venice has more than 300 miles of inland waterways, modeled after the parallel canal system in Venice, Italy. Here lies some of the most sought-after pieces of real estate in the country

As you might imagine, there is a lot of boating and water sports going on in this neighborhood. Not only is Fort Lauderdale Beach right there, but so is Las Olas Boulevard, which has plenty of places to eat, retail stores in which to shop and attractions to visit.

A number of schools are nearby including the private Calvary Christian Academy, Harbordale Elementary and Virginia Shuman Young Montessori.

The Las Olas neighborhood has single-family waterfront homes with a few scattered condominium complexes, Co-Ops, and luxury condos. It has a wide range of older and newer homes, ranging from $1 million to $40 million. If you’re looking to rent, it’s going to cost you well into the thousands, just to warn you.

There you have it: the best neighborhoods in Fort Lauderdale

If you decide to move in or to Fort Lauderdale, don’t hesitate to reach out.