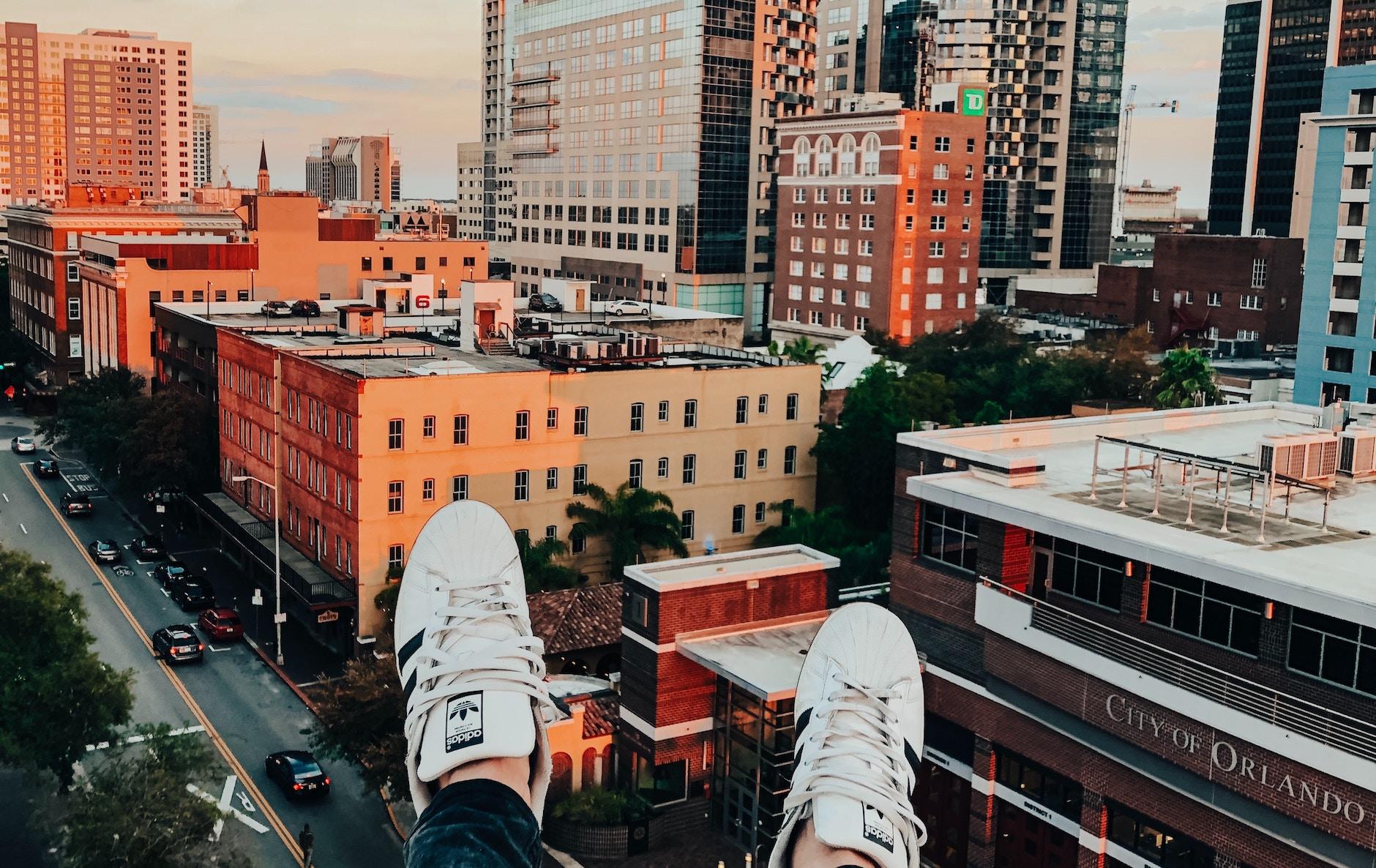 Moving to Florida? Here’s everything you need to know about the sunshine state.

For some, relocating to the peachy state of Florida can be a tough decision. It’s always easier when you know what to expect. That’s why we packed this article with information about Florida to see if it’s the right place for you!

What’s so sunny about living in Florida? Let’s cover a brief overview of the state.

As we mentioned previously, most of us have been to Florida on vacation. But, vacationing in Florida is much different than living in Florida. As sunburnt vacationers frolicking around in Florida’s theme parks and resorts, we’re only seeing one (very small side) of a rather complex state. Here’s a few things that makes Florida so sunny for the people that actually live there.

1. Florida is a big sunny state with a lot of personality.

There is California. There is Texas. There is New York. And, then, there is Florida. As the fourth largest state by population in the United States, Florida was estimated to have over twenty million residents as of 2016.

This massive number combined with the fact that 65.5 million people visited the state in the first half of 2018 alone means there’s a lot of people and a lot going on.

But, why do so many people choose to live there? We would argue Florida’s 1,350 miles of breathtaking coastline might have something to do with it. Or, perhaps the stunning landscape.

Genevieve Howland, a Chicago native that uprooted her family to move to Destin, Florida a year back after one of the coldest winters in Chicago history wrote about how lovely the landscape is on her blog:

“Going hand in hand with the weather is the state’s beauty. Where we live is covered in pine forests and palmetto palms. Wild flowers. Deer moss. Coastal dune lakes. Wild blackberries and rosemary. Magnolia trees. It really is a diverse and breathtaking state.”

But, the wildflowers, magnolia trees, and warm weather is only the beginning of Florida’s lovely landscape. Florida is also home to coral reefs, barrier islands, low rolling hills, underwater caves and plenty of swimming holes (that you might want to be careful when swimming in because… alligators).

2. Dozens of cities in Florida offering something for everyone.

In addition to the lovely landscape, Florida boasts some nice diversity in its cities too, which seem to offer something for just about everyone. For the young professional there is Miami, which is bursting at the seams with culture and art and a variety of ethnicities and a party scene that you’d have to experience to fully understand.

Then, for the individual looking to live in a Florida city that’s reasonably big but affordable, there is St. Petersburg. And, finally, for the baby boomers looking to kick back and settle down, there is The Villages a retirement community that’s the size of a small city at 69,000 residents. And, this is just a few… there is also Tampa, Orlando, Fort Lauderdale, Destin, Vero Beach, Tallahassee and the list goes on.

The pros and cons of moving to Florida: the good, the bad, and the ugly.

While some might argue differently, it’s not all sunshine in Florida. There is some bad and even ugly there too. But, we’re optimists here at Bellhop so we are going to give you the good first and then follow things up with the bad and the ugly.

3. The good stuff about moving to Florida (obvious pros).

Besides the beauty and the beaches and the sunshine (all stuff we’d claim is pretty good), Florida boasts no state tax. And, while this might not seem like that big of a deal, it is when you consider Chicago’s income tax is 3.75% and California’s is 13%. In other words, by moving to Florida, you’ll be putting away more money in the bank and that’s never a bad thing.

In addition, getting beachfront property in Florida is not as expensive as you might first assume. CNBC made a list of the cheapest beach towns to buy a home in and half of the cities listed were in the state of Florida. No state tax combined with affordable housing isn’t such a bad combination.

4. The bad stuff about moving to Florida (the cons).

If you’re not into tourism, which permanent residents of a place heavily touristed generally aren’t, Florida can get old pretty quickly. As we mentioned previously, 65.5 million people visited Florida in the first half of 2018 last year. So, somebody is lying if they tell you it’s not something to be concerned about.

With that said, there are certainly cities that see less tourism than others. If you land in Tampa, Destin or Orlando, there’s probably going to be more tourists around you than actual city residents. But, if you live somewhere like the hidden gem that is Vero Beach, ranked one of the best beach towns in the US, you’re going to probably see less tourism.

5. The ugly stuff about moving to Florida (the obvious cons).

Hopefully, this goes without saying, but Florida is known for hurricanes. Every year from June 1st to November 30th is Hurricane season. And, while we wouldn’t say this is a reason to avoid moving to Florida, it’s certainly one of the less-desirable qualities about the state.

The job market and the economy: Show us the money, Florida.

If you’re considering moving to Florida, it might not be a bad idea to gain a decent understanding of the sunshine state’s economy. You’ll need to make a living there, after all. Living in Miami and it’s cost can vary based on each neighborhood.

7. Florida, a hot economy that is only getting hotter.

In July of this year it was reported that Florida’s economy hit $1 trillion. Yes, you read that correctly. To give you an idea of how big that is… if Florida were its own nation, it would have the 17th largest economy in the entire world. That’s great for the state, great for the people living there and great for people like you considering moving to Florida.

But besides these strong more traditional industries, there’s something interesting going on in Florida cities like Miami. Behind the cities most prominent industries like real estate, tourism and hospitality there’s been something brewing under the water… tech. Recently, Curbed.com reported that Miami was ranked #8 in the nation for VC-backed startups right behind Chicago, which is saying something. For young professionals looking to gain a ton of experience while propelling their careers forward, the right kind of startup can offer the perfect opportunity. If startups have been something you’re interested in, we highly recommend you check out AngelList.

That’s wonderful but what’s it like to actually live in Florida?

The money is good. The weather is really good. But, what’s it life actually like there?

Folks who live in Florida claim there is something called the Honeymoon phase, where for the first few months to a year everything about it is amazing. We imagine it probably feels like being on an extended vacation.

But then, after the honeymoon period wears off and you begin to establish a routine and become accustomed to the wonderful weather, you gain a more realistic idea of what living there is actually like.

Genevieve Howland, the woman we mentioned earlier, wrote that one pro to moving to Florida was how easy it is to meet people. She says that unlike Chicago or Boston, where people have lived their whole life, many people who live in Florida weren’t actually born there. So, it’s not too shabby of a place to make friends.

And, with Florida being a very southern state, folks who move there tend to be pleasantly surprised by the southern culture… Genevieve explained how she doesn’t think she’ll ever get tired of hearing “yes ma’am” and “yes sir”.

Okay, so now that we’ve written this article in its entirety, we must say we are pretty “pro” Florida. Between the weather, the booming economy and that it’s very possible to find an affordable place to live in Florida, we think it could be the perfect spot for your next move.

Oh, and if you ever need help moving to Florida, well, you know who to call. (And just to make that semi-oblique reference 100% clear, we mean to give us a call.)