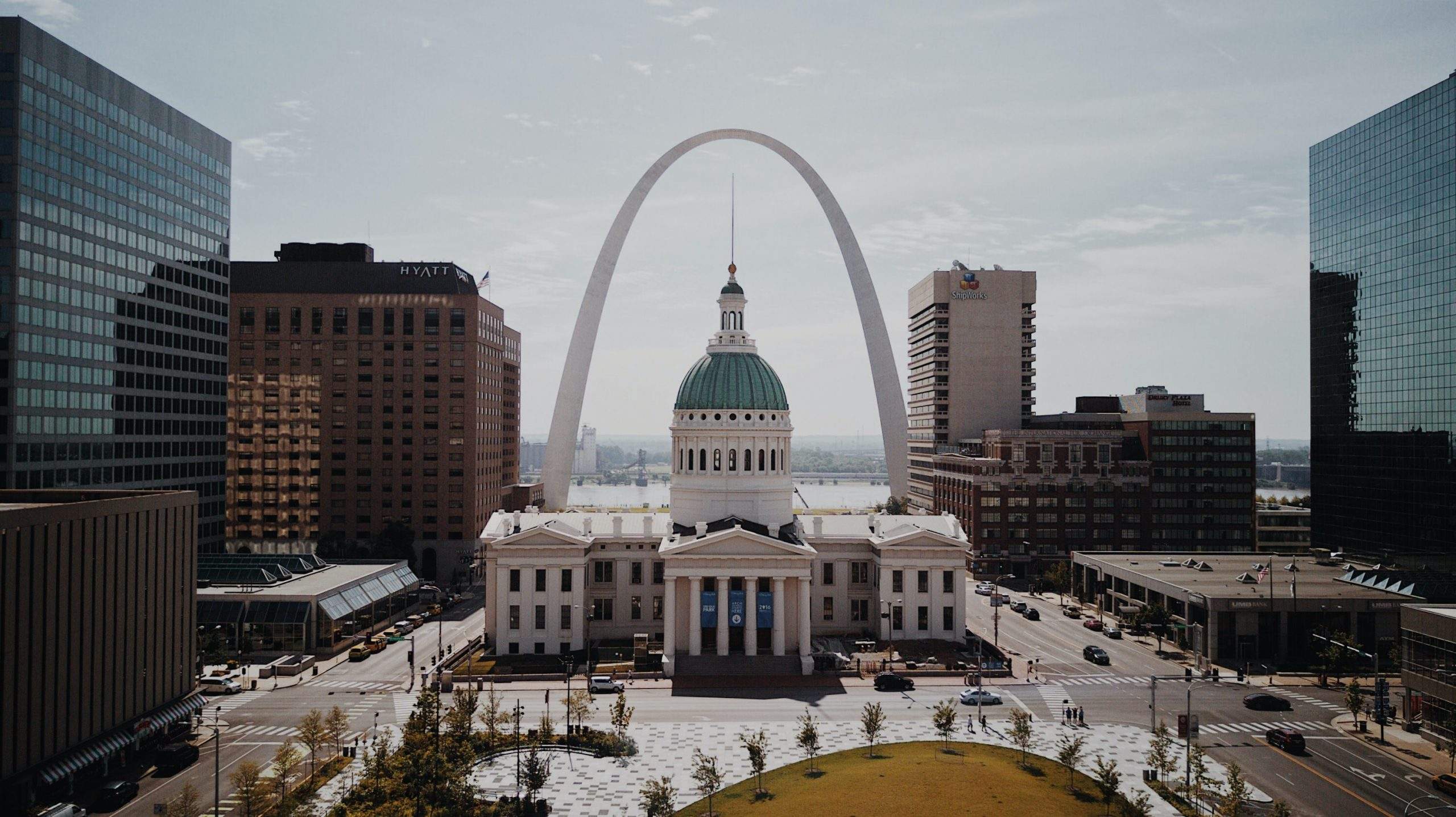 Up and Coming Saint Louis Neighborhoods

Moving to a new city is always challenging. And a large part of that challenge is looking for a place to live. There are so many things to consider when weighing your options—house styles, neighborhood safety, quality of schools, the convenience of location—it all can be quite overwhelming.

That’s why we’ve done the research for you, so you don’t have to (and by the way of introduction, we’re Bellhop—your friendly Saint Louis movers). We’ve examined what it’s like living in each of these highlighted neighborhoods. And we’ve created in-depth guides with insider scoops on close-by, popular destinations. Soon, you’ll be living like a local.

A Little About Saint Louis and its Neighborhoods

Saint Louis is the largest metro area in the state of Missouri. Its signature 630-foot Gateway Arch monument stands at the edge of the city, welcoming newcomers to enter through its towering walls. The city’s low cost of living (with houses at about half the cost of the rest of the country), strong job market, and low unemployment rate have made Saint Louis a secure home for many professionals and families.

At the heart of the city, Saint Louis’ bustling downtown features green lawns, walkable pathways, and art installments between the towering city buildings. Dozens of restaurants, taverns, venues, clubs, and casinos are scattered throughout the city. And Saint Louis’ venues and museums display the city’s cultural and historical past and present.

Today, Saint Louis’ 308,000 residents are wonderfully diverse, with locals from Germany, Italy, Ireland, Poland, Bosnia, Ethiopia, Africa, Asia, and Latin America. The city’s melting-pot-feel is one of its greatest features. And the numerous cultural traditions of its residents have been incorporated into dozens of Saint Louis’ annual celebrations and festivals.

Saint Louis is full of amazing places to live. The city is home to 79 distinct neighborhoods, each with its own vibe, culture, and offerings. With many growing and popular neighborhoods, you may be wondering where you should invest. Look no further. Below we’ll explore 5 up and coming neighborhoods in Saint Louis to get you started on your search.

While this neighborhood price tag is inching up, Webster Groves comes with great amenities. The area is home to some of the best schools in the city, historic homes, great sports and recreation opportunities, and community events.

Webster Grove is like its own little village and is one of the best up-and-coming areas in the city. Nestled in the midst of trees and greenery, Webster Groves has big-city conveniences while still maintaining a peaceful, small-town feel.

For those locals that are looking for a little more culture and class, you’re in luck. Webster Groves is also home to the Repertory Theater of St Louis and Opera Theatre of St Louis, both of which offer annual performances.

Some of Webster Groves’ great schools include Bristol Elementary School, Hixson Middle School, and Webster Groves High School among others.

Webster Groves is dominated by large houses and expansive yards. Its preservation of historic homes makes these streets especially beautiful. But you’ll also find homes that have been upgraded with upscale, modern features. Small fixer-uppers can still be found for around $100K. Otherwise, prices in the neighborhood range wide from $240K to $1.5-million.

Although this neighborhood is small, with a population of just over 2000 people, it’s one of the most iconic and historic neighborhoods in the city. This stunning neighborhood is full of the city’s more prospering local businesses and residents. Lafayette Square is Saint Louis’ oldest historic district, and its charm is admired throughout the city.

Residents and their pets are commonly seen strolling amidst the ample green space of Lafayette Park. This area is the oldest publicly owned park west of the Mississippi. Local eateries, from high-end restaurants to the charming Square One Brewery, are walking distance away.

Throughout the year, the community gathers for free summer concerts, local events, and historic home tours. Residents can also stroll through the specialty shops or travel three blocks north to reach downtown.

Some of the best schools near Lafayette Square include Lafayette Preparatory Academy, New City Schoool, Roosevelt High School, and Mallinckrodt Academy of Gifted Instruction among others.

Lafayette Squares’ gorgeous historic architecture is the eye-catcher of this neighborhood. Multi-colored victorian homes with beautiful wood trim and flowering gardens line each block. This pretty neighborhood has started to catch some attention, and real estate prices are moving up quickly.

What’s drawing newcomers to Tower Grove East is the hometown feel you get when entering this community. Local markets fill up with friendly neighbors. Kids play together, and locals team up to improve their district or work on the neighborhood’s community garden.

Tower Grove East sits just to the east of Tower Grove Park and the Missouri Botanical Garden. Popular spots to eat in the neighborhood include The Shaved Duck, which serves tasty soul food, Maskerem, an Ethiopian restaurant, Rooster, which plates breakfast foods and crepes, and Cafe Natasha, for vegetarian fare.

Potentially our favorite piece of Tower Grove East, though, is South Grand Boulevard—a stretch of ethnic restaurants, hip bars, and shops along the west end of the neighborhood. You’ll find Brazilian, Turkish, Vietnamese, Irish, Chinese, and Mexican food at your fingertips.

For nightlife hubs, you’ll have access to whatever drinks quench your fancy. Check out Crafted, Tick Tock Tavern, and The Gin Room. The neighborhood is bordered by several thrift, vintage, and boutique clothing stores. On the north end of the neighborhood, you’ll find the Stray Dog Theater, which puts on regular plays and projects.

Even though Tower Grove East is starting to pick up, its median home value is still under $200,000. Historic homes with detailed brick exteriors are selling for around $250K. Next door, gorgeous Italian renaissance townhomes are selling for $500K. And there are still homes that need some aesthetic touch-ups for under $70K.

Benton Park West is in the process of a bright new revitalization. This up-and-coming neighborhood was added to the National Register of Historic Places back in 2005. Now, historic homes, apartments, and lofts sit a street away from the energized entertainment hubs, restaurants, cafes, and bars.

Still on the cusp of the cutting edge, Benton Park West is affordable for now. But we think it won’t be long before others start to notice the homes’ original moldings, stained glass windows, and shaded front porches, and the century-old trees that line its streets.

Packed with small businesses and restaurants, residents of Benton Park West can live off of local goods. St. Louis’ most popular streets—Cherokee, Jefferson, and Gravois—run through the neighborhood and bring with them popular spots to eat, drink, and hang out. Surrounded by areas that have already revitalized, residents can quickly access new and upcoming businesses just a few blocks away.

Benton Park West is primed and ready for some house flipping. Homes with beautiful bones are boarded up, some selling for under $25K. But nearby, there are well-kept smaller houses, beautiful and big single-family homes, and modern new builds.

The enormous German Gothic Cathedral of South St. Louis sets the stage for the rest of the neighborhood. Overall, Fox Run carries this grandiose style throughout its streets. With structures dating back to the late 1800s, Fox Run’s historic architecture makes this neighborhood especially distinct.

With beautiful homes, affordable prices, and proximity to some of St. Louis’ best, we can’t figure out how it took this long for Fox Run to catch our attention. Fox Run’s location is ideal. Small and tucked between two larger hoods, Fox Run locals have access to some of the city’s best amenities. Some residents with homes on the edges of the community can even walk to St. Louis’ shopping districts, downtown, parks, and gardens.

Families of Fox Park have access to the top-rated Mason Elementary School, City Academy, New City School, Collegiate School of Medicine and Bioscience, and Roosevelt High School, among others.

In Fox Park, you can buy a stunning historic brick home for under $150K. Nearby streets in this neighborhood, though, have real estate prices that are flying up quick, reaching $400K. Nearly all the homes in this neighborhood are townhomes, with many of the large single-family homes split into two units.

There you have it: the 5 hottest ‘hoods in Saint Louis!

We hope this was helpful, and if you decide to take the plunge, don’t hesitate to reach out to your friends here at Bellhop. As we said, we coordinate local and long-distance moving services in Saint Louis, and we would love to help.